Well Carroll has done it again! Although this time in a reduced role, the most powerful Mustangs to ever roll off the assembly line will bear the Shelby name. Within in the next few weeks the first 2007 Ford Shelby Cobra GT500's will arrive at Ford dealers across the nation. To say this is the most anticipated Mustang in recent memory is an understatement. The right to buy the first GT500 manufactured sold at the Barrett Jackson auction for $600,000. Dealers are also regularly finding customers willing to pay upwards of $20,000 over sticker price for the chance to get their hands on one. 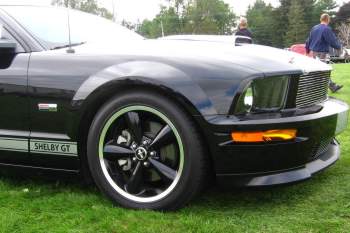 One would think with all buzz surrounding this car it would be closely scrutinized, and this one has and does not disappoint. Originally Ford engineers were shooting for 500 horsepower on this new Mustang. They then adjusted the number to 475, but just weeks before its release word leaked that it would be rated at 500 horsepower and 480 ft/lbs of torque, nearly matching Ford's super car, the GT, which is rated at 550 horsepower.


This new SVT Mustang is much different than the last one, the 2003 Mustang Cobra. The power plant in the '03 was a supercharged 4.6L rated at 390 horsepower. The 2007 will sport a supercharged 5.4L engine and will be rated at 500 horsepower, matching the total of domestic exotics such as the Dodge Viper and the Corvette Z06 but at a fraction of the price. The engineers began this project with a 5.4L truck engine. The heads were replaced with the aluminum heads from the Ford GT, custom camshafts, a Roots Style supercharger making 9lbs of boost, and a water to air intercooler.

Hiding beneath the supercharger is a new low profile intake manifold, the throttle body from the 6.8L truck engine program, an oversized radiator, increased cooling system and custom exhaust manifolds. The car does use the same transmission as the '03 Cobra, the T-56.


The suspension is also upgraded from the Mustang GT. The front uses McPherson struts, where as the rear uses a three-link suspension, with a solid rear axle. Many experts have argued that using an obsolete rear suspension takes away from the GT500 being a state of the art performance car. However, SVT President Hau Thai-Tang says this causes no problem. This same rear suspension has been tested in a racing Mustang FR500C and has proven to provide a well balanced ride. The key to the GT500's three link rear end is the panhard rod, which provides very accurate control of the rear axle. The GT500 does sit lower than the Mustang GT, uses recalibrated front and rear shocks, upgraded front and rear sway bars, and revised rates on the coil springs.


The changes in the GT500 don't stop there though


The GT500 sports impressive 14-inch front brakes and 11.8-inch rear brakes. All of this power is transferred to the pavement by the 19x9.5 aluminum wheels. The GT500 is also modified on the exterior as the front and rear fascia's are unique, making it look like the muscle car it is. This car looks downright nasty and has the performance to back it up. The design team also added the Lemans Stripes and lower rocker panel stripes, a styling cue taken from the '60's era Shelby Mustangs. Just like the original Shelby Mustangs, the convertibles with not have any of the stripes. The car uses SVT and Shelby badges, throughout the exterior and interior.


Production for the first year on the GT500 is targeted between 7500 and 9000 units. The cars are expected to begin shipping in late June of early July of 2006. With each dealer only expected to receive one or two, these cars will initially be hard to come by. My recommendation if you are interested in this car would be to wait it out for six months or so, until the price gouging at the dealer subsides. This is a car sure to have a "High Demand Price Adjustment" added to the sticker at the dealer.


In a throwback to the original Shelby GT350-H's of the '60's, Shelby has also reprised his role with Hertz Rental Cars, producing around 500 Shelby GT-H Mustangs. The Rent-A-Racer program is back for a 40th anniversary run. These cars will be available through the Hertz Fun Collection at airports nationwide. This car is not a Ford Shelby Cobra GT500 but a Mustang modified and shipped through Shelby, making it a more authentic Shelby than the GT500. The car wears black paint with gold stripes, just like the originals.


This car promises to be the most powerful Mustang ever, and one hell of a good time. However, with the demand the way it is, you won't be able to get one of these in the short term for the MSRP of $43,000. Shelby and Ford have matched wits again and the thought of what the future will hold is exciting, we'll just have to stay tuned!


Jason Helferich is the President/CEO of Street Style Customs in Cincinnati, Ohio. The company specializes in aftermarket performance parts for many cars and trucks. http://www.streetstylecustoms.com

Text and photographs copyright © 2007 - 2021 Peter Marinacci. All rights reserved. Car designs and names are trademarks of their manufacturers.